Last week I finally met the boy of my dreams. 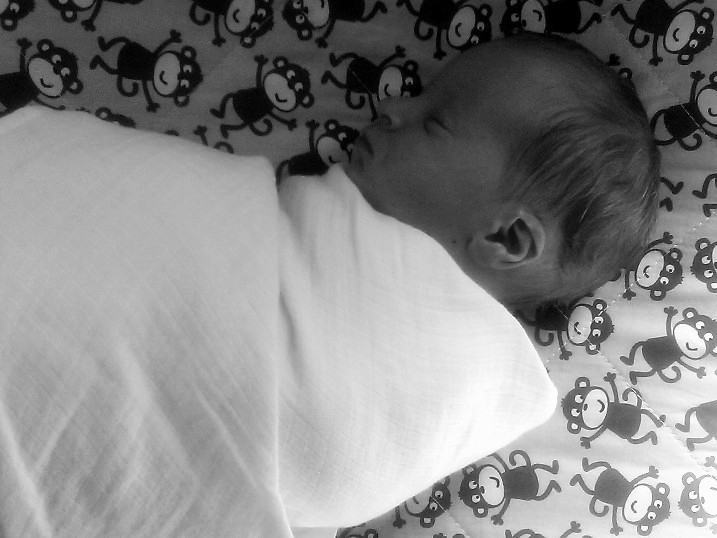 As I type this, he’s sleeping in my arms. When I first laid eyes on this little guy, I knew that I would live and die for him, moving heaven and earth all the while. A wise man once told me that you don’t fully hit maturity until you become a parent – I now fully understand the weight of his words, though in my case, waiting until my early thirties to become a father certainly lessened the impact of the transition.

Still, I can’t imagine life now without this darling baby boy. Sure, the sleep deprivation is starting to get to me, but any negatives are far outweighed by the positive feelings. Generally, I just feel grateful and blessed, especially since my son managed to avoid a common birth defect with which I was born (a cleft lip and palate). I credit his mother’s genes, not mine. Though I state it in as light-hearted a manner as possible, the decision to have children weighed heavily on me, as I knew that I had a strong genetic predisposition to pass along that little defect (which scars emotionally far more than physically). While researching the genetics behind cleft lip and palate, I recall reading the helpful advice from animal breeders that dogs and cattle with the defect should not be allowed to breed. One can’t read such suggestions without inflicting collateral damage on oneself. Bark. Moo.

So, my baby boy is all the more beautiful in my eyes, especially his little philtrum, but I would have loved him all the same had he inherited my defect. At this point, though, my wife and I do not plan to have more children. It’s a personal decision, but I can’t help feeling like we took a genetic gamble and won, so we’re planning to quit while we’re ahead.

How does having a child affect my plans for early retirement? As of now, not much. I plan to just keep socking as much spare cash into my taxable investment portfolio as possible, while also maxing out my Roth IRA for the next few years. We also plan to continue adhering to our pre-retirement budget as best we can.

Regarding baby expenses, my wife is breast-feeding, which is free. Otherwise, we’ll mainly use cloth diapers, especially once he gets out of his current newborn-sized disposables. Parents and friends have donated the vast majority of clothes, toys, and books that we have for him, though we did buy a nice new car-seat, which I plan to sell on Craigslist once he’s done with it.

Looking down the road, I don’t see our lifestyles changing that much. We don’t have a television or cable service, so any videos he wants to watch will have to come from borrowed DVDs or online sources such as PBS or YouTube. Hilariously, I already have an old desktop computer set up for him with a free operating system (Ubuntu Linux) loaded to the brim with educational software and games, though it will be a few years before he can use it. What can I say? It was part of my nesting behavior this past summer.

We plan to have a minimal amount of toys, as we’ve been advised (and as I recall from my own youth) that children can easily entertain themselves with cardboard boxes, pillows, and kitchen utensils. We do plan to teach him how to swim and how to ride a bike. I’m not against video games, though I’m afraid the little tyke will never get to own his own Xbox or other gaming console, at least not while he’s living at home. My wife and I are fine with being the weird parents with lots of books but no TV or soda pop in the house. I doubt our humble home will become the local haunt for neighborhood children.

Looking even farther ahead, my current job as a university professor does have one incredible benefit: children get a 100% tuition waiver for four years of college. Provided that I’m still working here, my son could get a degree from a private university while only paying for meals and housing. It’s an astounding perk, though I would never force him to attend the college where I work. Plus, there’s the possibility that I’m not working here down the road – as in not getting tenure or deciding to retire early – in which case I’ll provide what support I can, but I’m also okay with him taking out student loans.

These decisions are far in the future, so no need to worry about them now. In the meantime, I’m going to enjoy his cherubic face as he sleeps blissfully in my arms. My own mother told me that they don’t stay this small for long, so I plan to enjoy every sleep-deprived second of it.