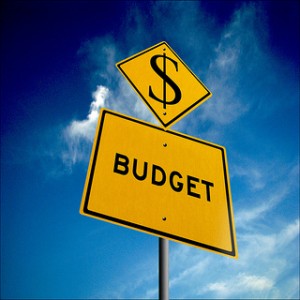 Since I’m now getting serious about retiring early, the first step is to formulate a master plan on how to get there. Everything I’ve learned so far tells me that there is a simple formula on how to achieve early retirement: Spend less money now + earn more income however you can + invest the difference = NO MORE BOSS. Over time, your savings will compound into a big rolling snowball that will eventually become monstrous and flatten your future expenses.

Sounds simple, right? Yes, it’s such a simple formula, but the discipline to rigidly follow it is ridiculously difficult. Oh well, a journey of a thousand miles begins with a single step.

In order to follow the first part of the formula, I needed to set a budget for our household. So, I wrote down the expenses I knew we had to pay (taxes, insurance, utilities, mortgage) and pored over some old credit card statements to get a feel for what we’ve been spending at the grocery store and for gasoline, and compiled my list in my trusty Google spreadsheet.

The following is what we currently spend in a typical month. Certain items must be paid every six months or annually, such as property tax and insurance, but for simplicity’s sake I went ahead and broke them down into a monthly format.

Keep in mind that the total above contains mortgage payments for two houses (see A Tale of Two Mortgages), one of which is an investment property. Also, the Grocery category may look on the low side, but that’s because I bundle places like Costco and Super Target into General Merchandise, even if the items we buy there are actually groceries. The collective Other category includes the occasional restaurant trip, haircut, or whatever else doesn’t quite fit elsewhere.

Now that I have these expenses in writing, my hope is that it’s a worst-case scenario. I suppose that number isn’t too bad, especially to include two mortgages, but I want to lower it more. I’m relieved that there are no auto payments, student loan payments, or (gasp!) credit card payments on there. If we spent exactly that amount every month, it would total $32,100 yearly. Hmmm… That’s higher than I’d like it to be.

My wife and I have spent much time recently on the budget talk, and we’re both on board to lower expenses however we can. We’ve pretty well axed dining out, except perhaps for something like an anniversary. We also have plans to bring down our electric bill. I could call around for insurance quotes, and that may help a little. I definitely want to keep our term life insurance since we have a little one on the way. And our cell phones are grandfathered into the Sprint SERO-Premium plans at $45 per month each. Still, I may switch to a prepaid plan when my contract expires, saving a few bucks.

I might as well admit it: The elephant in the room is gasoline for our two cars. Thankfully, both cars are paid off, but we live in a major city and our house is regretfully about 12 miles from my job. My wife only teaches part-time right now at multiple colleges, and she may drive anywhere from 10-30 miles each way. Sigh. I pine for the days when we used to bike to grad school. For the record, I’m still considering biking to work, but the problem (other than the south TX heat) is that there’s not a good way to get to my work by bike. I’ll mostly end up on heavily trafficked Interstate access roads without a bike lane or even a sidewalk, and I’m not sure I’m ready to risk having a Texas-sized monster truck roll over me. Maybe I’ll sell my car and get a scooter. To be continued….

Oh, I plan to use the free Mint.com for accountability, as they have some slick charts and tools to help track categorical spending. They can even e-mail me with a report like, Hey Mr. IM, you waaay overspent on gas this month. Get that scooter, already!

Let’s talk about income. As I stated earlier, my wife only works part-time, and even that is going to end – at least temporarily – after our first child is born later this year. Six months or so thereafter, I suspect she’ll be itching to resume at least part-time work. As for me, my job is fairly secure for the next 4-5 years. Our current net income, as of 2012, weighs in at $4,929 monthly, putting us just within middle-class territory. That amount includes our monthly rent from the investment property, but does not include my 403(b) contributions, which are deducted automatically before my paycheck arrives.

Firstly, my wife will hopefully land a full-time job in the next year or two, or at least take on some more part-time gigs. Secondly, I hope that I’ll get a raise every year or two. That’d be nice. There’s also the possibility of increasing the rent on our investment property, though rents have been flat in that area lately. I could also spend time beefing up the little e-Commerce website that I run, or sell some items on eBay / Craigslist / Amazon. Hopefully all of these will happen during the next few years, and that would give a nice boost to us on the income side of the equation.

As it stands now, in a worst-case scenario I’ll still have roughly $2,254 left over each month. What should I do with it? I already have an emergency fund, so I don’t need to add much to regular bank accounts earning squat interest. Here’s my current plan, listed in approximate priority:

OK, so if you’re following the math, you’ll notice right now that I’m 18 cents in the hole! I did that for the sake of using nice, even numbers when possible, and I’m banking on finding some spare change in parking lots or between my couch cushions each month.

One quick note here: My Health Savings Account (HSA) is a family plan, which has a total contribution limit of $6,250 for 2012. My employer contributes $150 monthly ($1,800 yearly) to that account, leaving me the remaining $4,450 if I choose to maximize my contribution. I view the HSA as the lowest on my priority list – if zombie locusts emerge from the ground, pillaging my home, slashing my tires, and drinking all the soy milk in my refrigerator, the excess HSA contributions will be the first to get the axe.

That’s my current plan. If I can manage some more savings from the budget side, I will. If I can earn some more income, even better. I’m planning to keep maxing out our Roth IRAs for the time being, but to gradually reduce contributions once I approach my early retirement date. I view the money allocated for the taxable brokerage as the real engine powering an early retirement – any reductions in spending or increases in income will go straight to that category. If you’re curious, I’m not yet sure how that taxable money will be invested, but that will be a future post. How the money is invested is less important than how much cash is set aside for investing each month.

This overall plan is by no means perfect, and I suspect modifications will happen, but at least I now have a budget and a plan. I’ve begun my journey with that single step. Many more will now follow.